This year, 2019, Purnama sasih Kapat (the forth fullmoon) falls on Sunday, October 13th. Based on several sources (both primary and secondary), The forth fullmoon is the best time to hold a prayer ceremony. Right now, the sun is right on the equator, so the sun is shining hot and at 12 noon our shadow is perpendicular to the body. Likewise with the moon, positioned right on the equator, so that when the night moon shines full.

And it was at this time that Mapping Team of Dalem Tamblingan Catur Village was given a special opportunity to pray in the Gubug Temple. So then, when tirta (holy water) is tapped over the head, a fresh feeling coursing throughout the body. Moreover, when entered into the esophagus. Fresh as fresh as possible …

Purnama sasih Kapat (the forth fullmoon) in Tamblingan is part of a coil of works, a very long series of ceremonies which began at Tilem sasih Kasa (the fifth darkmoon)in July, until Purnama sasih Kalima (the fifth fullmoon) in November. The series of ceremonies performed by the Indigenous people of Dalem Tamblingan Catur Desa (Gobleg, Munduk, Gesing, Umejero) have two main objectives, namely to cleanse nature and humans from bad things, and to share welfare with others.

The activities carried out at Purnama Kapat took the form of a pengeresang in all the traditional temples of Dalem Tamblingan, then continued to the upstream or head, namely around Tamblingan Lake and Alas Merta Jati. In addition to purifying the area, this ritual also begs the welfare of the Owner of the Universe which will later be distributed in all directions, namely water as a source of life.

It was during this ceremony that I saw Bali’s “past”, when all that was done was for myself and the universe: 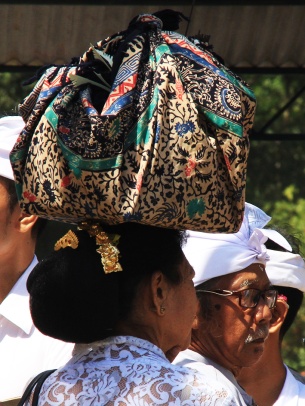 Only perahu, traditional boat that can be used on Tamblingan Lake. Even in daily activities, there should not be a motorized boat on Lake Tamblingan. Rules were made and implemented to maintain the quality of lake water, to maintain the purity and purity of Lake Tamblingan water, so that it remains and has always been a source of life for the people of Adat Dalem Tamblingan Catur Desa, even communities in three districts in Bali namely Buleleng, Tabanan, and Badung.

From Tenurial Conference in Jakarta

Training on Bulbs and Desalination Processing in Ceningan